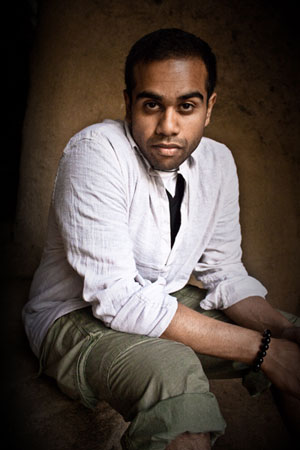 Every so often, the music industry must wrestle with the game changers – the originals – the righteous rebels.  The ones who come in and mess everything up.  The individuals that dare to be exclusively themselves in a world that applauds musical, social, and moral conformity.  These anomalies disrupt the norm and force a lane that was never supposed to exist.  Jeevo.  Singer, Songwriter, Rapper, Producer, Artist.

Jeevo was born in Jaffna, Sri Lanka.  His family came to the Unites States as refugees, fleeing Civil War in his homeland when he was just 2 years of age.  Jeevo graduated UCLA in 2005, and has been a rising star in the independent music scene ever since.  His music speaks directly into the things that people care about: sex, relationships, significance, God, love, hope, and destiny.  He is a voice for the voiceless, and a presence of light and peace in a world growing in its love for darkness, violence and hatred.

Jeevo’s music has been compared to the likes of Kanye West, Coldplay, John Legend, Lupe Fiasco, Jay-Z, Boyz II Men, and Alicia Keys.  He utilizes every genre of music to tell his story.  As an artist in every sense of the word, Jeevo defies categories with ease, and showcases his talents with an enormous landscape of sounds.  His poetic lyrics and unique delivery make him completely mainstream yet fully independent and artistic at the same time.

Jeevo’s music has revolutionized the entertainment industry in Sri Lanka, as selected songs have been played on radio stations that only broadcast in their respective language. This is the first time in the history of Sri Lanka where one artist has been played in radio stations of all three languages – Tamil, Sinhalese, and English. This is huge in the racial reconciliation of his native country, where ethnic conflict has brought devastation in the lives of thousands. In the summer of 2009, Jeevo raised $25,000 from his album release concert at the world renowned Ambassador Auditorium to help the internally displaced people in Sri Lanka.  In the summer of 2011, he organized a similar concert at Bovard Auditorium in USC to raise funds for the garbage villages in Egypt.  Jeevo has put out 5 solo albums, with his most current ground breaking project titled “Dreaming In Color.” He is actively touring a Dreaming In Color Experience that is an audio and visual experience for his fans across the world.